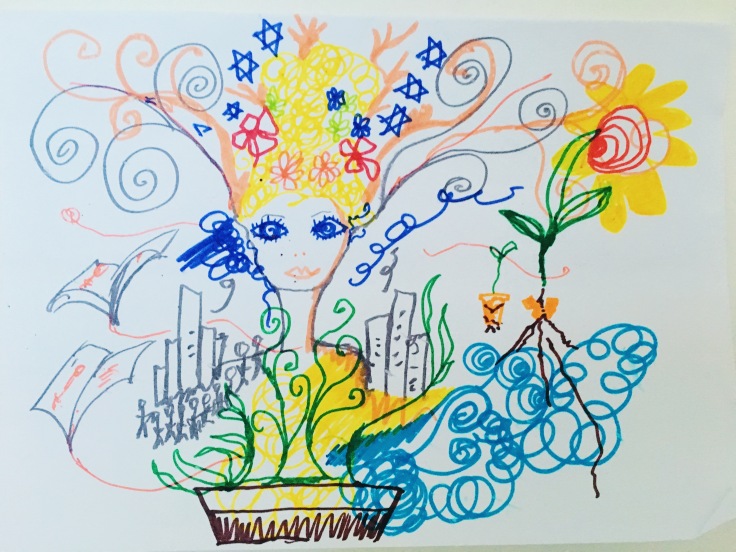 Processed with VSCO with f2 preset

After getting back from holiday visiting my Grandparents, I headed back to University with a slightly heavy heart about the fact that work was pressing, due to it being my final year. As a result I went for a walk with a close friend to St Michaels’ mount where we drew a picture for each other for our year ahead. While the rain poured down, she promptly drew a picture of me all dressed in yellow surrounded by sunflowers, flying books and in what looked like, New York. Quite to my surprise I asked why? She had no reason. Then within the next week I had some really confirming signs and messages that New York was possibly on God’s heart for me.  I had been quite clear with Jesus that this year was the one I wouldn’t be able to travel to New York (as each year before I felt a sense I would be going back soon). But this year was my final year so work was the priority. Yet He persisted.

So over the next few days I began to lay down my own plans and started to surrender to His will. As I did some incredible things happened. I went to a University party with a friend, no ticket, no money and no ID. We just rocked up with little notes that we had written at home that were encouragements and prophecies to the people we believed we would meet that night. So we stood outside in the queue for the party and prayed and worshiped over every person that walked past us. We felt such tangible joy and ended up raucously laughing and spreading the joy as people flooded around us waiting to enter through the security. We gave out our little notes to a few of the people that God highlighted to us. Then later on we started to wade through the masses to the back of the queue. There we found a girl who we asked if we could pray for, as we both felt moved to ask her if she would like that. To which she replied she would and was touched that we had asked. In return she asked if she could pray for us for anything. We explained we had arrived with nothing, so would love a miracle to happen and for us to somehow get into the party! So she kindly said she would pray. Then almost immediately after this we were at the tail end of the huge queue and it was all beginning to flow into the party. So my friend and I just followed them all with confidence we would get in. We walked past one security guard and then another. Then we approached one who was not messing around. He asked for our ID and we point blankly explained we didn’t have one with us. Surprised at first, he then kindly let us through. So we walked on…The next guy didn’t have any of it and was blunt with us saying it was impossible without a ticket to get in. We explained we knew and just stood there laughing with joy and no fear. As we did the guy started to soften and for some reason then just let us both in as he turned a blind eye. Yet we both stood there, waiting. We didn’t want to enter without full permission. At this point a friend came out and saw me and made a way for us to go in. Later on the security guard thanked us for being so honouring to his authority, and explained how touched he was that we hadn’t entered even when he turned a blind eye.

When we got in the buzz of our entry overflowed in and through us. By this stage most people at the party knew us as the two without a ticket so knew this was a miracle that we had got in! I had some interesting and blunt interactions with some guys that confessed their love for me and then went to promptly get off with a few other girls within minutes. I confronted them both in love, that they are made for more than that and that this kind of behaviour is not honouring or man-like in the slightest. We then went to the bathrooms and ended up singing worship songs at the top of our lungs over every girl that walked in and all those struggling to stand after drinking too much. We sang and sang….”I’ve got the joy, joy, joy, joy, down in my heart”…..and “I am no victim, I am who He says I am, He is who He says He is”. When we walked out I felt God clearly say to me: “I am going to do this for you but on a bigger scale in New York”. I pushed this thought to the back of my head as it seemed so irrational. However when Monday came, I was with a close friend and still couldn’t get New York out my head so really sheepishly asked her if it was irrational to be thinking that God might be suggesting to go to New York for fashion week, which would mean leaving that Friday from London!? She looked me square in the eyes and said: “Jessica, we should pray about this now and see what God says“. Slightly amazed by her reply, I agreed. So we sat together in silence and asked God for a picture about whether this was His idea to go. After about ten minutes of silence we told each other the pictures we had. I was stunned to hear that we both had seen me all in yellow and present at the show. I had seen a picture of me backstage of a show, singing over the place. She also saw me there, in yellow and planting seeds in people’s hearts and speaking words of light. In this moment I knew that I would be going! The next day, Tuesday 7th, I laid everything down, prayed and asked God for favour in order to get there! By the end of the day I had been offered free accommodation in the centre of Manhattan and researched flights that were not too expensive. By Wednesday 8th, I had permission from my tutor, advise to go see graphic design studios too, I had also got a camera from Uni to rent for my trip and booked my flights!

“God doesn’t call the equipped, He equips the called”

Then on Thursday 8th I met two friends, Jeanet and Elle, for breakfast. They prayed for me and then just after I had sensed I would meet someone who had gone to Bethel out there, Elle suggested that she could reach out to her Bethel alumni and see if anyone lived there. I gratefully agreed that would be amazing. Then while I was on a train back to London, with absolutely no plan and just a pocketful of faith, I read the story of Moses in the Bible and asked God for a friend and partner while I would be out there, like I had at the party. When I arrived into London I had about an hour of freak out, wondering what in the world I was doing! Within the last three days I had decided to travel to New York, on my own, with no plan and to rock up to fashion week and see what God would do! What!!?
Just as I was freaking out, I was listening to a podcast by Graham Cooke. He was talking about being a warrior and the power of peace and our mindsets. Turning negative thoughts into positive and trials into triumphs. At that moment I refocused my mind on the goodness of God and the truth that He won’t let me down. Just as I did that I got replies to my messages from some girls out in New York who replied with invitations to meet up and join them at their church service on my first night. This was a total answer to prayer on my side.

The morning came to fly…..the 9th of the 2nd month. This was wild as it was the 2nd of the 9th month that I had last flow out to New York! God is incredible at planning the smallest of details! As the flight took off from London, a tear trickled down my cheek in awe of the goodness and miraculous character of God. Only He could have made this happen. With full faith that He was by my side, I travelled with total peace and excitement for the adventures ahead of us!