At the airport just before flying out to Kenya, my Dad was telling one of the guys that his parents had been missionaries in Kenya for 10 years. I overheard and asked more about this, surprised he had never told me this in person! He continued saying that they had set up a University there and that there was now a library after my Grandfather’s name. In total amazement I wondered if we might have the chance to visit the place. 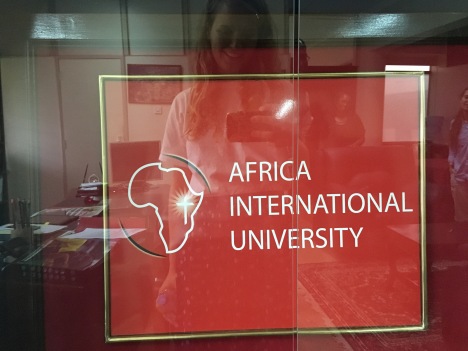 During the week I randomly brought up the subject of my Grandparents and their past missionary work out in Kenya and how they set up a University. One of the charity workers was in the conversation, and a few days later came back to me to ask if it was Africa International University that they set up. After agreeing that it was, he shared with a surprised and amazed response that his wife works in the library that was made in honour of my Grandfather! After connecting the dots, we phoned his wife and in total awe she kindly invited us to meet her on our last main day and agreed to give us a tour of the University. She couldn’t believe I was the Granddaughter of Tony Wilmot, she couldn’t wait to meet me. She explained that there was a portrait of my Grandfather in the library and that they would be honoured to host me for the afternoon.

On arrival we were greeted beautifully and there were even some men with cameras to film and photograph the moment. I was simply amazed and humbled by their love. They took me and our team for a tour of the campus and even showed me the house that my Grandparents used to live in. It has now become a school, so this was so special to look around and meet the children that attended there. I had the honour of meeting the deputy head and and even being able to pray a blessing over him. All in all it was a phenomenally special afternoon and one I will never forget. Stepping into the legacy of my Grandparents made me stop and wonder about my own life and the beauty of the legacy we can leave to future generations. What a truly special couple who have left a lasting and powerful impact on many hearts and lives.