The Johnston family invited me along super spontaneously to a worship night hosted by Sean Feucht on the Golden Gate Bridge on the 9th July. I said “yes” to the adventure and we drove there at 2pm to arrive for the 6pm start. 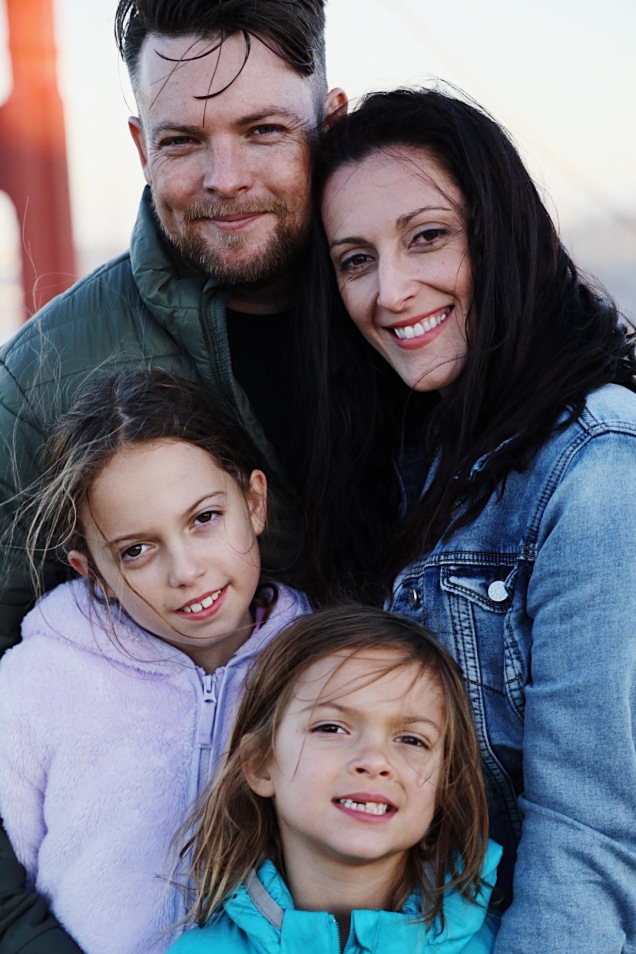 I arrived at their house before we left and their daughter, Charlotte, handed me a gift from Crowing Jewels. It was a bracelet with a Bee, elephant and “Voice of Hope” charm on it. I was deeply touched as each of those charms meant something very profound to me. Especially the “voice of Hope” as I realised that during this time I have had some deep convictions that I have kept quite close to home, yet slowly feeling the grace to share them.

On our journey to San Fran we had some incredible conversations and something sparked back to life inside of me where I realised adventure like this is what I have been craving. Wild heaven adventure, where we get to declare truth, praise and God’s promises over different and particular places that God highlights. The Golden Gate Bridge I suddenly realised is a powerful and prophetic spot to worship on, as it is the bridge between two places, it is an iconic spot and it is part of California that needs a touch of heaven. I later found out that it was a battle to build the bridge and had 2000 law suits against it before it was built. This was such a beautiful reflection to me that on the other side of a battle is a breakthrough and a world known monument.

At this time of lockdown, it has really fascinated me that the things that are being taken away are our touch and hugs, our voices, our singing. NOT ON MY WATCH. I truly believe that the enemy comes to steal the exact thing that the Father is bringing. I truly believe that there is going to be an increase of healing through our touch, our words, our singing. Our songs are what create unity, healing, freedom and are always the mark of a movement. Songs pioneer the way for change to come. NO ONE can take away our praise, our songs and our freedom.

The root of this whole virus has been fear and control. Often we can tell the root of something by looking at its fruit. This is no coincidence that all we are seeing is fear spreading and control taking root. I personally will not bow to fear. LOVE CASTS OUT FEAR. There is a power in love that heals, nurtures souls and redeems lives that fearful and controlling acts never can.

On the journey I ended up telling them the story of how my creativity began and then Christy encouraged me how significant it was as she had researched about the story of Elijah and told me about the story when he was at one of the lowest points of his life and God said to him “come out of the cave Elijah”. Bible says – He then wrapped himself in his cloak and came out of the cave. “I did word search on the word “cloak” and it actually means “scarf” / “anointing”. So it actually means he wrapped himself in the Kavod glory of God and that’s where he encountered God face to face. In the still small voice. So I find it interesting you are making scarves as it represents the KAVOD glory of God and wrapping ourselves in Him and our identity”.

Christy then told me her story through depression and Nate added to the story from his side. It was so powerful to hear. He mentioned he had seen some of a kids TV program one day about a Lion that has lost his roar and he felt God say “Christy has lost her roar but it will be restored”….
Seeing the roar that is within her now is such a testament that the enemy came to steal the very thing that she has, as he was afraid of the power that comes through her voice.  Even just after knowing her for such a short time, I have been deeply inspired by the authority she carries, the keys she releases and the lives she changes simply by accepting her call from heaven.

Processed with VSCO with a4 preset

Once we arrived we parked on the North side, found the group and then tried to walk over the bridge. The police tried to prevent our access due to Corona, but eventually they let us walk across in single file! Once we got roughly to the middle of the bridge, Sean Feucht set up microphones and speakers and we began to worship. We were standing a little towards the back of the group. 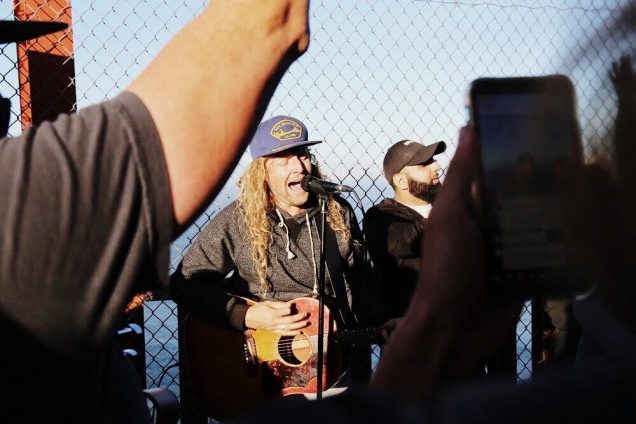 While standing there a police man came and stood right next to me. His last name was Marco Flores and he asked me what we were doing. I wasn’t sure if he approved of us being there or not, but went on to explain we have a faith and believe in a God of the impossible, so we were worshiping over San Fran to see His presence fall and heart of love overflow in this place. He was super touched to see it all happening right there on the bridge and shared a sweet smile with me to say how much it meant that we were doing that. While I was worshiping I felt God speak to me about some very specific things for him.  I couldn’t stop thinking about a couple things in particular: his precious family, suicide prevention, and the peace and authority that he carries.  I then turned to him to share the word God had given me about the authority he carries being much more than just a physical police badge. I shared how him being there that night was no coincidence and that his last name beautifully represents the flowery presence and fragrance he brings. He then shared with me that he prevents people from suicide on the bridge. Hearing this was a stunning confirmation to me of what God had already told me and I shared with him how he had reminded me of a video of a man I had seen on YouTube who works with suicide prevention on the bridge too. Marco Flores went on to tell me he had saved 150 people so far and that the man I was speaking about in the video had gone to his high school! I was blown away hearing this all and how clearly God was speaking into this man’s life. It was such a stunning moment.

Christy then prayed over him too and I asked if I could wrap my scarf around his shoulders, as it was a design I made at a time when I felt no hope for life and was really depressed and had suicidal thoughts. I felt there was something powerful in putting it over his shoulders in replace of the heavy emotional baggage he has had to carry for many people on this bridge. I could feel all of heaven’s pleasure over Marco, as a warrior of love who stands so strong in the truth. He shared with me “I can’t do my job alone. I pray everyday for God’s help”. As I put the scarf around his shoulders, I shared with him that this scarf saved my life. I explained that it showed me that out of my most broken pieces, beauty could flow. It was a life changing moment from ashes into beauty. That was my exact prayer and hope for him, that he would carry an increased sense of what it looks like to carry the redemption, hope and freedom of heaven on his back. That out of life’s stings, he would see honey flow.

The rest of the worship set was super powerful. One moment that touched us all was when we all turned towards San Fran and sang “Amen. We are for you”. It was such a special moment of seeing the power of our praise and that our prayers and worship brings peace, heaven and breakthrough.

Charlotte and Sophie, the children I was with, danced with me at first and I gave them each a scarf to hold. Sophie held “Be You” scarf and released the wild freedom to be oneself, fully free, over San Fran. Charlotte held the “Rest” scarf as a prophetic picture for that city to rest in the goodness of God and that transformation from a caterpillar into a butterfly is possible.  I held the “Freedom in the Father’s Embrace” scarf to represent God’s heart as a Father to run towards His people with love and also as a prophetic image of the eagle expanse of His heart over this nation. The design looks like an eagle, so that felt very profound to hold on the Golden Gate Bridge in the USA – known as the eagle nation!

Processed with VSCO with a4 preset

My biggest prayer for USA right now is that they will receive keys to heaven and bring it down to earth in such a significant way. It felt wildly profound to be on the bridge and then even travel to the viewing point to see it from above, as a bridge is what I believe God is wanting to build right now in people’s hearts, in nations, in cities and worldwide. A bridge of UNITY. A bridge between differences, a bridge of hope, colour, freedom and truth. A bridge that withstands the deepest seas and tides and stands for generations. This is the type of bridge that God is in the process of building.

Earlier this year I drew a picture in my journal of a bridge with the word UNITY over the top and with two archways in the colours of a rainbow. While we were taking photos at the viewing point I got out my “Beauty from Ashes – Believe” scarf and was spinning with it, when I noticed two girls on the other side of the cliff with a rainbow flag for the LGBTQ. It was a profound moment of seeing what heaven is wanting to restore to earth and to see the true rainbow bring heaven, restoration, identity and beauty. My presence there was a powerful representation of how we need to arise and speak of the goodness of God and His faithfulness to heal, embrace and set free His children.

It is time to BEE and to lift our flags of freedom, lift up our voices in song and not let anyone steal our praise. 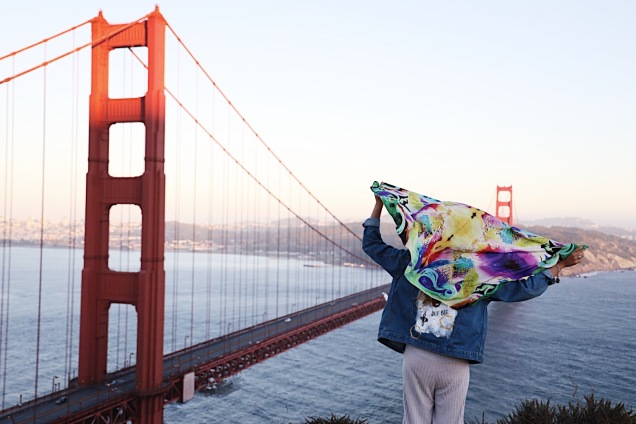 “Praise is the highway to the throne of God”